The Curse of Frankenstein 1957 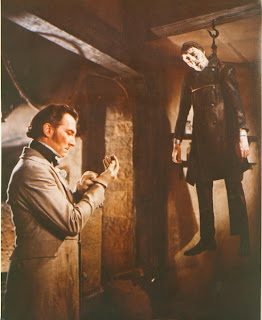 But what am I doing? I'm not harming anybody. Just robbing a few graves.

The Hammer film that started it all, the revival which I will forever be grateful. CURSE OF FRANKENSTEIN features a far more devious mad scientist than what we were in accustomed to with Colin Clive's creation back in the 30s. Baron Victor Frankenstein as visualized by the incomparable Peter Cushing is methodical, determined, cold-blooded, even conscience-less in that he will not stand for anyone to ruin his experiments in creating life in a man made by his own hands.

To see how heartless and cruel he can be on multiple occasions, just take two such examples. So ruthless a desire to get his hands on a brilliant mind, he will set in motion the murder of a renowned scientist whose ancient body is on it's way already to the grave. So Victor "assists" him in his date with death by staging an accidental fall from the stairs. Victor even pays for the deceased scientist's buriel, inside his own family crypt just so he could have easy access to the body and brain.

Another instance is Victor's disposal of his maid, Justine(Valerie Gaunt; the opening vampire bride of Dracula in HORROR OF DRACULA)who threatens to expose him if he will not marry her(she also has an unborn child sired by Victor in a tawdry fashion).

Robert Urquhart is Paul Krempe, once Victor's teacher, soon a participant in the revival of a dead puppy, watching in horror as Frankenstein grows more and more inhuman and diabolical as he yearns to build and create a man by any means necessary. Paul can clearly see how evil it is to fool with nature in such a way, but Victor sees nothing but the success of creating and sustaining life in a being of his own making. Christopher Lee is the unfortunate creature who is brought to life, seemingly without any human qualities to know right from wrong. The reason is that Paul interupts Victor while he has extracted and bottled the brain of his murdered genius, damaging it in a struggle. Frankenstein blames Paul for all that happens afterward because of the brain's damage, not capable of understanding the crime he himself committed in order to attain it to begin with. Justine, her murder, isn't given credence, she was just an obstacle he no longer has to hurdle. Hazel Court is the lovely cousin, Elizabeth, endebted to Victor for his charity(she and her mother were provided an allowance, something that had occured before Victor's mother's death)and there was an arrangement that she would become the Baron's wife when she come of age. Paul only remains at the Frankenstein castle out of worry for Liz's well being. Paul is truly the only one who can stop Victor once and for all. What made the Hammer Frankenstein series so unique is the lengths for which the cerebral madman would go to see that his dream creation of man made by his own hands would become a success. Each and every film also shows how he would fail, this mad dream ruined by one circumstance or another. Frankenstein is correct in that if his brain would've been placed in the monster's skull, it might've yielded a different result, but what about the man who once used it in life..the ramifications for having your brain in the body of a ghastly brute, a patchwork of body parts viewed by the outside world as nothing more than a sideshow attraction. The ultimate success of the Hammer series derives from Cushing's making the part all his own.

It's always a pleasure to sit and watch CURSE OF FRANKENSTEIN during October and I never miss a chance to watch it at some point in the month. It remains an enduring classic in my mind that I will continue to enjoy hopefully for years to come.
Email Post 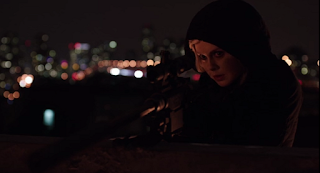 All the Creatures Were Stirring (2018)